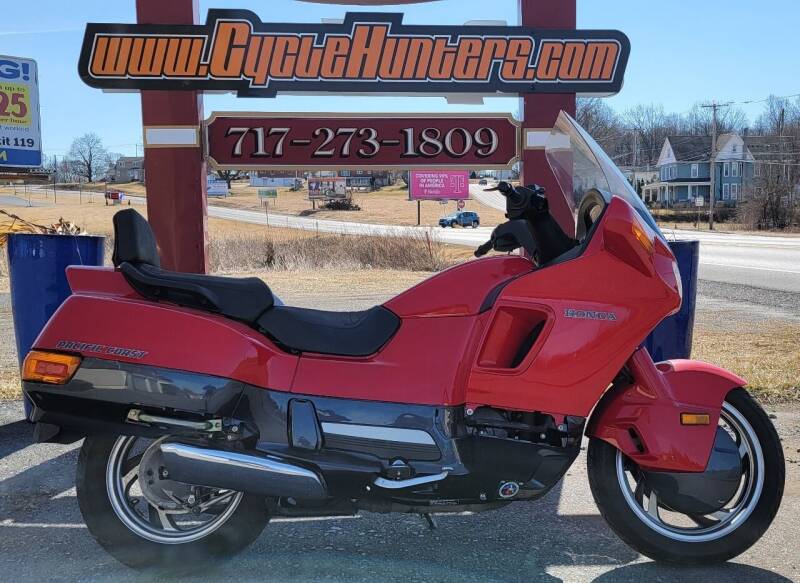 The Honda Pacific Coast was considered a radical bike when it debuted, designed specifically for the US market (and named after the PCH). With its integrated trunk, unique bodywork, and automotive-like instrumentation, the Pacific Coast was marketed towards white-collar professionals as an easy daily rider. These really were some of the easiest motorcycles in the world to own and maintain, with a comfortable riding position, low-maintenance shaft drive, and a reliable drivetrain that can easily go 80-100k with just regular services. By far the niftiest feature of the Honda Pacific Coast was the integrated trunk. The passenger seat was attached to a trunk lid that was controlled by a pull release under the lockable gas cap. Two storage areas flanked the rear wheel, and the space was huge – you could easily store two full-face helmets and two medium-sized bags, or plenty of groceries. It really was a game-changer at the time – shame the PC800 sold poorly. The Pacific Coast was actually offered in two model runs – from 1991-1993, it wasn’t offered. While this bike might have been ahead of its time in many ways, it never really captured the public’s imagination, and it was eventually relegated to the world of commercial failures. This is a bike that is a clear survivor and is in really nice shape. Like all our bikes this will be fully serviced, inspected and detailed at the time you take delivery. See this and other great deals at www.cyclehunters.com **Milegae Exempt** HaldemanAuto/cyclehunters.com 102 Old Ebenezer Rd Lebanon Pa, 17046 717-273-1809