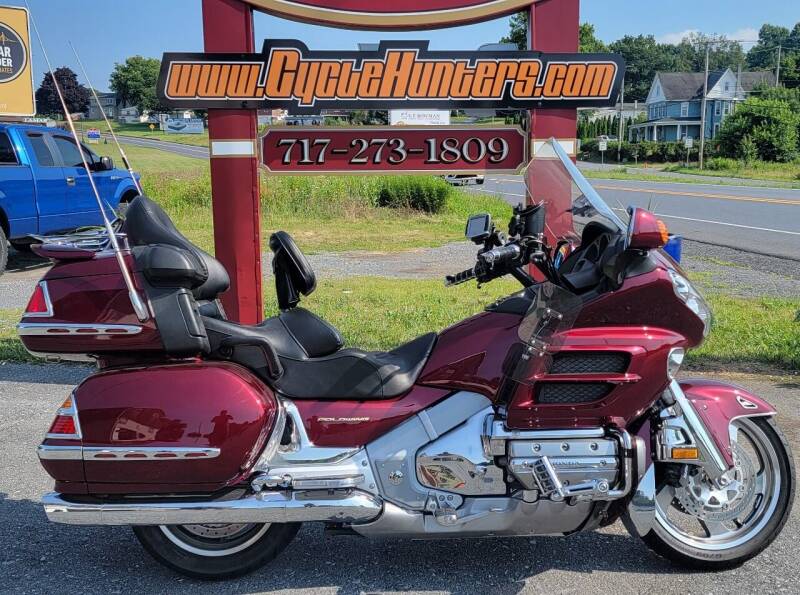 For nearly 40 years, Honda's Gold Wing has been the benchmark for touring motorcycles the world over. And the 2004 Gold Wing continues to set the standard by offering luxurious comfort, astonishing horsepower matched to athletic handling, unequaled touring amenities. Lay-z-boy comfort… The six-cylinder engine produces effortless power. Sophisticated sport-type suspension gives phenomenal handling. The rider is surrounded by luxurious touring features. Honda has done the impossible: The weekend just got even better. The Honda GL1800 Gold Wing is the kitchen sink, bells and whistles touring motorcycle. Looking for the best comfort for rider and pillion, max luggage space and a motorcycle that’ll make kids point and stare? You want a Honda GL1800 Gold Wing. Evolved from the late 70s GL1000 into the current intergalactic-cruiser incarnation. Plus there’s a huge social scene of Honda GL1800 Gold Wing owners too. So if you are looking for a "wing", chances are you've known about these bikes for quite some time and have coveted the luxurious ride it offers. For not just the rider but both rider and passenger. Effortless cruising the highways, or exploiting the nimbleness of the chassis through the twisties, the Honda Goldwing is a bike that needs no intro, you already know. This like all our bikes will be fully serviced, inspected and detailed at the time you take delivery. See this and other great deals at www.cyclehunters.com HaldemanAuto/cyclehunters.com 102 Old Ebenezer Rd Lebanon Pa, 17046 717-273-1809