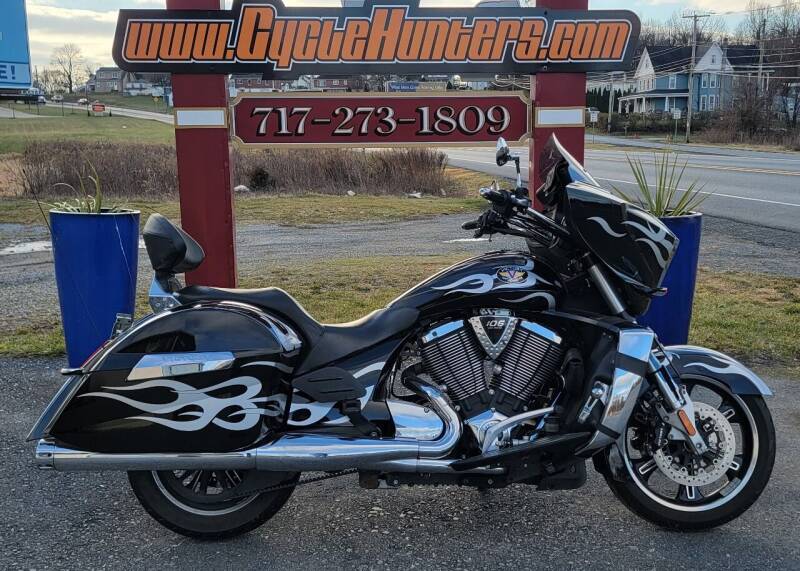 Looking at this Victory Cross Country one would, without a trained eye think it's a new and improved Street glide. Well, one wouldn't be that far off really. With the same ethos as it's counterpart, they pretty much do the same thing. Thus the name cross country. However with the Victory, you get a more modern look and feel. Victory, a division of Polaris Industries, puts some fun and style in light touring adventures with the 2011 Cross Country, a motorcycle that will happily take you from one town to another without the handicapping weight and top-heavy front that slow down traditional touring-only models. Victory does not shy away from emulating the things that make competitors successful, which explains the similarities between its Cross Country and a certain domestic rival called Street Glide. The looks and riding position say it all, even though the retro-style fairing hides some advanced technology and design that scream Japanese more than American. With no ungainly radiator, bulky sides or unattractive wires and lines, the clean-looking, no-frills Victory Cross Country only gets first-grade components such as 3-valve cylinder heads that boost torque and fuel efficiency, a compact, electronically-controlled ignition and injection system, a 6-speed transmission that operates flawlessly, and a final drive that uses a silent, zero-maintenance belt. All the ingredients required for a pure touring motorcycle can be found in this sweet machine from Victory. The heart of the Cross Country consists of a 1,731cc (106 ci) V-twin that produces 87 hp at 4,900 rpm. Surprisingly flexible at low revs, the engine allows you to cruise at under 2,000 rpm and, from there, it accelerates beautifully and without turning a hair. So with all that in a nutshell, the Victory CC is a bike that will do everything you need and then some. Especially in a style all its own. This Victory has the passenger backrest, lockable hardbags, Batwing faring with radio and highway pegs. Like all our bikes this will be fully serviced, inspected and detailed at the time you take delivery. See this and other great deals at www.cyclehunters.com HaldemanAuto/cyclehunters.com 102 Old Ebenezer Rd Lebanon Pa, 17046 717-273-1809