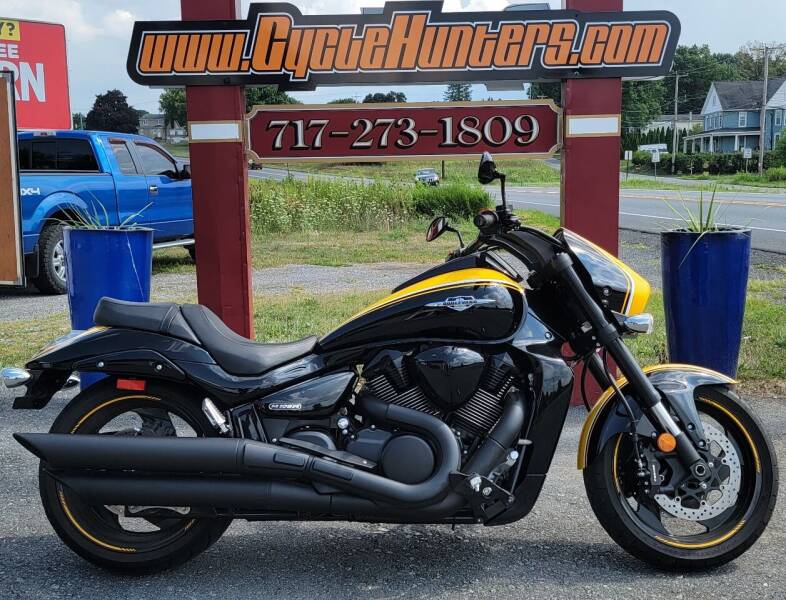 Big, bold, fat, muscular – however you want to coin it, eight years after its release, the M109R is still a bike that has grown men salivating at the prospect of twisting its throttle. And why not? At the time of its release – 2006 – Suzuki had claimed it “the most powerful V-twin cruiser in the world.” With huge, 4.4-inch forged aluminum-alloy pistons - - some of the largest gas engine pistons being used in any production bike -- the 1783cc, 8-valve DOHC, V-Twin engine is designed for big power and gobs of torque. Suzuki lists output at 127 horsepower and 118 pound-feet of torque, numbers aided by a three-piece, 9.5-liter volume airbox, and sportbike-derived fuel injection. All this comes from an engine that’s cradled inside a high-tensile-steel frame. Up front, 46mm fork legs provide 5.1 inches of travel, and the rear suspension, which uses a swingarm of cast aluminum, is a single-shock design that soaks up 4.7 inches of bumps. Thanks to the fairly compact engine case, wheelbase stays at a reasonable 67.5 inches. The cockpit view features a wide fuel tank and a tank-mounted speedo, with indicator lights tucked into the headlight cowl. The large twin-disc front brakes, adapted from the sporty GSX-R1000, seemed more than up to the task of slowing the big girl down, too, though the rear brake didn't add much to the party, but they rarely ever do. The big Suzuki is still a major power player in a small pool of musclebikes, but it’s beginning to show its age. Nevertheless, most power-hungry cruiser riders won’t be disappointed in this beefy Boulevard. This bike is a stock example and is in great shape. Like all our bikes this will be fully serviced, inspected and detailed at the time you take delivery. See this and other great deals at www.cyclehunters.com HaldemanAuto/cyclehunters.com 102 Old Ebenezer Rd Lebanon Pa, 17046 717-273-1809