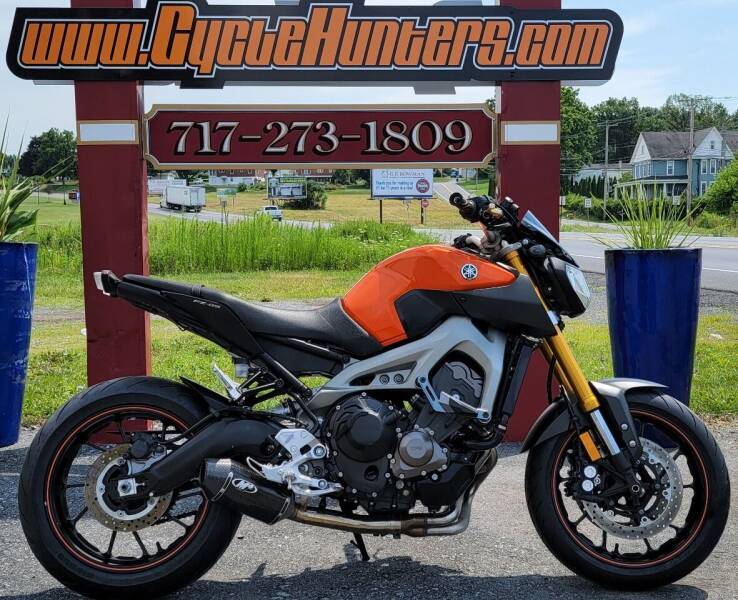 Ready to trade in?
Let us know what you have.
Have additional questions?
Give us a call and we'd be happy to help!

The 2014 Yamaha FZ-09 promises a lot when you look at the specification sheet. 414 pounds wet, an in-line triple displacing 847 cc, and crank horsepower and torque that easily trumps Triumph’s universally praised Street Triple. The FZ-09 is a small motorcycle. It is not only light, it is narrow and with a relatively low seat height by today’s standards. The rider’s triangle is also quite tight, with the bars, seat and pegs adding to the sense of a small machine. Taller riders might find the ergos too tight, but our test riders (5' 11” being the tallest) found the FZ fairly comfortable. The triple created by Yamaha makes great sounds and, even more important, great power from idle through to redline. It is hard to overstate how impressed we are with the power Yamaha has squeezed out of this 847 cc motor. Coupled with the light weight of the bike as a whole, the FZ-09 is extremely quick, particularly around town where its acceleration, at first, can even be quite startling. This is why the FZ-09 can be such a blast to ride for a skilled pilot that can use what it has to offer. Living with the fuel injection issues we pointed out in our initial riding impression was annoying, to say the least. With three engine maps available, including Standard, A and B, we frequently chose the softer power output of B, robbing the bike of much of its grin inducing acceleration, simply because the Standard and A positions were far too sensitive, and abrupt, in response to throttle position changes. Indeed, both Standard and A are so sensitive that bumps transferred through the suspension to the handlebars can lead to very slight throttle position changes (the ride-by-wire throttle has a very light return spring), and an unintended lurch forward or appearance of engine braking, depending on which direction your wrist moved. When you are in the mood to ride aggressively and you are “in the zone”, Map A is a blast, so long as you open the throttle “sweetly” (to borrow a phrase from Valentino). If you are just cruising around, however, Map B might be your best choice. This bike is mostly a stock example. The exhaust is the aftermarket M4 carbon pipe for that added bost of attitude. It will have aftermarket turnsignals on the rear and other mirrors. But no matter, like all our bikes this will be fully serviced, inspected and detailed at the time you take delivery. See this and other great deals at www.cyclehunters.com HaldemanAuto/cyclehunters.com 102 Old Ebenezer Rd Lebanon Pa, 17046 717-273-1809

By placing this call you agree to the Terms and Conditions of Use of this website and that this call may be recorded by Haldeman Auto, using technology powered by Carsforsale.com, for business purposes.

By placing this call you agree to the Terms and Conditions of Use of this website and that this call may be recorded by Haldeman Auto, using technology powered by Carsforsale.com, for business purposes.