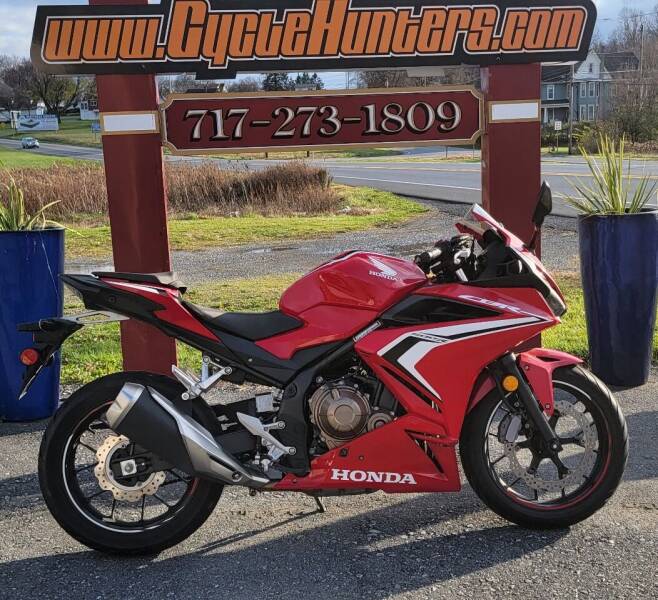 .The latest Honda CBR500R is refined, well balanced, beautifully built and peppy. First introduced in 2014, it's a stalwart of the A2 genre and is now in its third iteration. It offers credible performance alongside aspirational styling, complete with MotoGP-inspired wings. Finished in a delicious glossy red and black and complete with a chunky 17.1-litre fuel tank between your legs, it offers a ‘big-bike’ feel. You can’t help but steal glances at yourself in shop windows as you cruise through town and could easily mistake it for a Fireblade. It feels far more special than a simple stepping-stone between licenses and at a fraction over six grand, is stonking value for money. This is complemented by the LED headlights and all-new LCD dash, which features a similar layout to the larger capacity, four-cylinder CBR650R. An adjustable brake lever, blue anodized fork tops and well-finished, logically-placed switchgear seal the deal. After all, it’s more exciting carving through a 60mph corner on a fizzing CBR500R, than doing the same on a Honda Fireblade SP, as it yawns back at you. A single wavy 320mm disc and twin piston Nissin caliper set-up has decent power, but is best supplemented by the rear to really get the Honda stopped. With its new valve timing, bigger airbox and straighter inlet tracts the CBR500R now has a surprising amount of grunt, so there’s no need to chase gears and revs on a rainy commute, but it’s properly fast when you poke it with a stick and well…abuse it. CBR500Rs are pretty much bomb proof and our online reader reviews give nothing but glowing comments. It’s also a machine used at the Honda Ron Haslam School, thrashed for thousands of miles around Donington Park with zero mechanical problems. So throw a leg over the mid sized CBR and have the best of both worlds of speed and comfort. Like all our bikes this will be fully serviced, inspected and detailed at the time you take delivery. See this and other great deals at www.cyclehunters.com HaldemanAuto/cyclehunters 102 Old Ebenezer Rd Lebanon Pa, 17046 717-273-1809